It probably began with an accident thousands of years ago...

According to one legend, rain washed the fat and ash from animals into a nearby river, where they formed a lather with a remarkable ability to clean skin and clothes. Perhaps the inspiration had a vegetal origin in the frothy solutions produced by boiling or mashing certain plants. However it happened, the ancient discovery of soap altered human history. Although our ancestors could not have foreseen it, soap would ultimately become one of our most effective defenses against invisible pathogens.

People typically think of soap as gentle and soothing, but from the perspective of microorganisms, it is often extremely destructive. A drop of ordinary soap diluted in water is sufficient to rupture and kill many types of bacteria and viruses, including the new coronavirus that is currently circling the globe. The secret to soap’s impressive might is its hybrid structure.

Soap is made of pin-shaped molecules, each of which has a hydrophilic head — it readily bonds with water — and a hydrophobic tail, which shuns water and prefers to link up with oils and fats. These molecules, when suspended in water, alternately float about as solitary units, interact with other molecules in the solution and assemble themselves into little bubbles called micelles, with heads pointing outward and tails tucked inside.

Some bacteria and viruses have lipid membranes that resemble double-layered micelles with two bands of hydrophobic tails sandwiched between two rings of hydrophilic heads. These membranes are studded with important proteins that allow viruses to infect cells and perform vital tasks that keep bacteria alive. Pathogens wrapped in lipid membranes include coronaviruses, H.I.V., the viruses that cause hepatitis B and C, herpes, Ebola, Zika, dengue, and numerous bacteria that attack the intestines and respiratory tract.

When you wash your hands with soap and water, you surround any microorganisms on your skin with soap molecules. The hydrophobic tails of the free-floating soap molecules attempt to evade water; in the process, they wedge themselves into the lipid envelopes of certain microbes and viruses, prying them apart.

“They act like crowbars and destabilize the whole system,” said Prof. Pall Thordarson, acting head of chemistry at the University of New South Wales. Essential proteins spill from the ruptured membranes into the surrounding water, killing the bacteria and rendering the viruses useless. 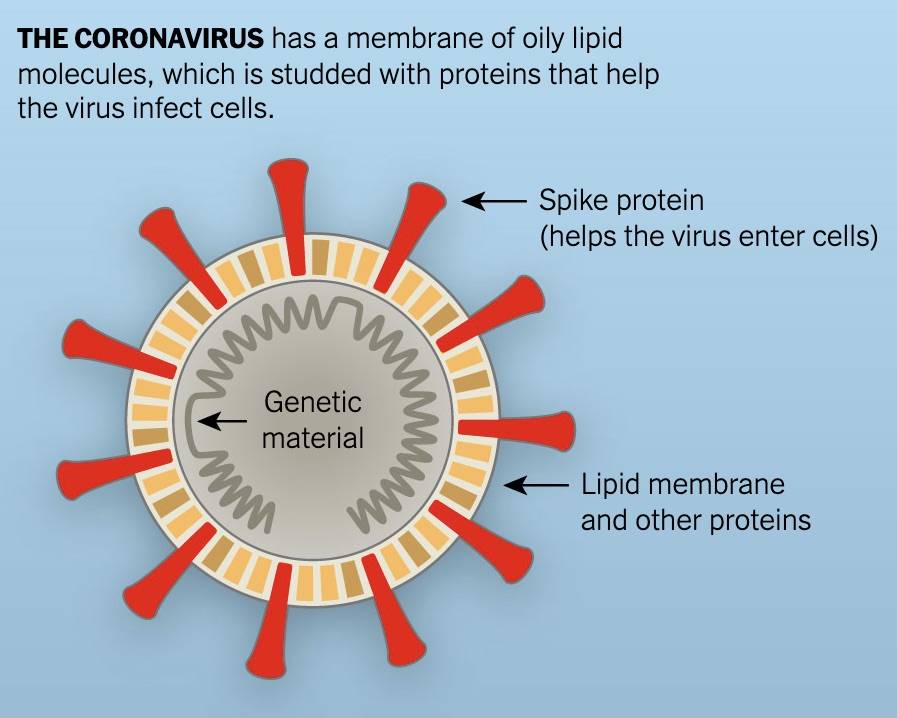 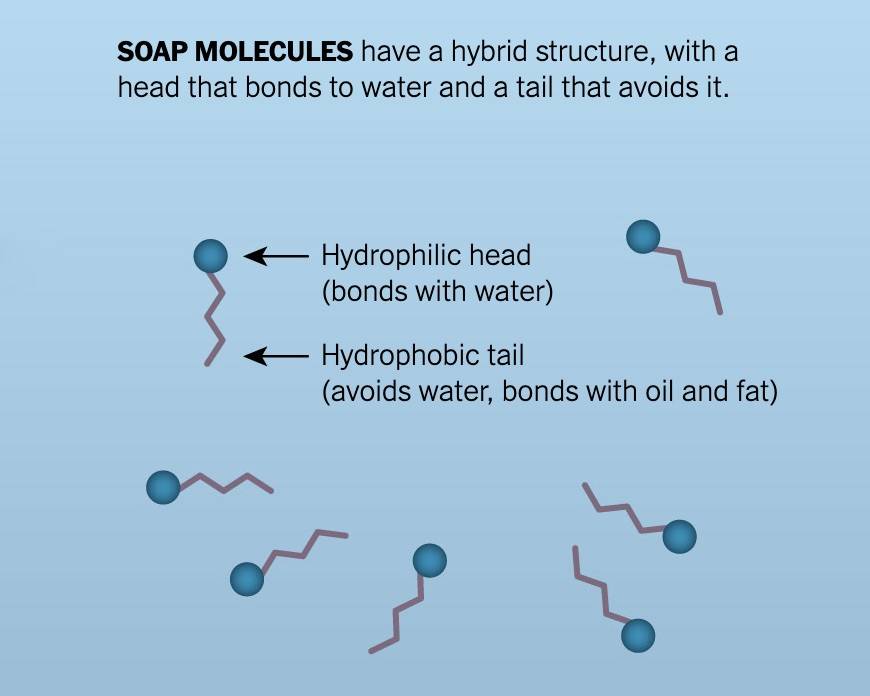 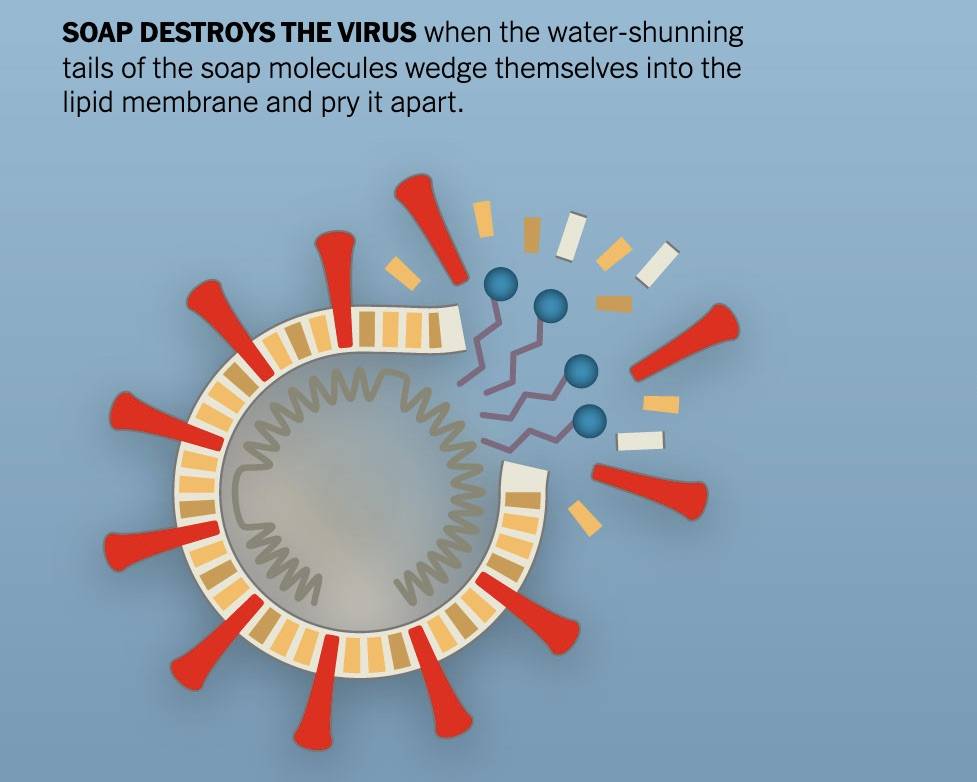 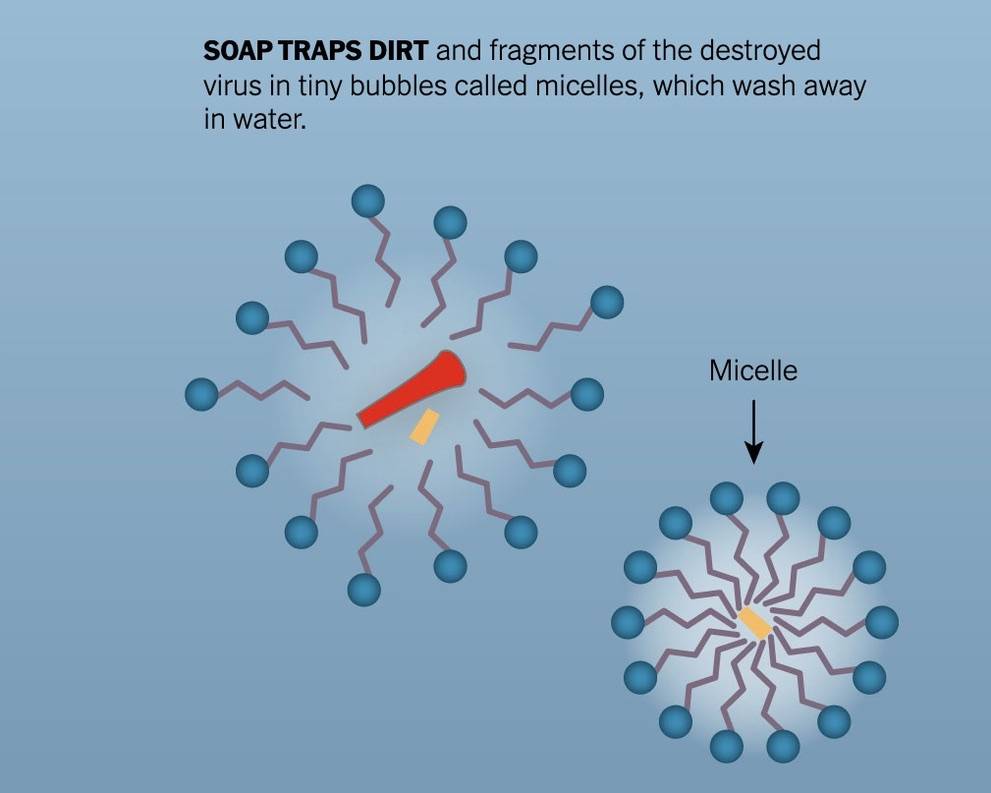 In tandem, some soap molecules disrupt the chemical bonds that allow bacteria, viruses and grime to stick to surfaces, lifting them off the skin. Micelles can also form around particles of dirt and fragments of viruses and bacteria, suspending them in floating cages. When you rinse your hands, all the microorganisms that have been damaged, trapped and killed by soap molecules are washed away.

On the whole, hand sanitizers are not as reliable as soap. Sanitizers with at least 60 percent ethanol do act similarly, defeating bacteria and viruses by destabilizing their lipid membranes. But they cannot easily remove microorganisms from the skin. There are also viruses that do not depend on lipid membranes to infect cells, as well as bacteria that protect their delicate membranes with sturdy shields of protein and sugar. Examples include bacteria that can cause meningitis, pneumonia, diarrhea and skin infections, as well as the hepatitis A virus, poliovirus, rhinoviruses and adenoviruses (frequent causes of the common cold).

These more resilient microbes are generally less susceptible to the chemical onslaught of ethanol and soap. But vigorous scrubbing with soap and water can still expunge these microbes from the skin, which is partly why hand-washing is more effective than sanitizer. Alcohol-based sanitizer is a good backup when soap and water are not accessible.

In an age of robotic surgery and gene therapy, it is all the more wondrous that a bit of soap in water, an ancient and fundamentally unaltered recipe, remains one of our most valuable medical interventions. Throughout the course of a day, we pick up all sorts of viruses and microorganisms from the objects and people in the environment. When we absentmindedly touch our eyes, nose and mouth — a habit, one study suggests, that recurs as often as every two and a half minutes — we offer potentially dangerous microbes a portal to our internal organs.

As a foundation of everyday hygiene, hand-washing was broadly adopted relatively recently. In the 1840s Dr. Ignaz Semmelweis, a Hungarian physician, discovered that if doctors washed their hands, far fewer women died after childbirth. At the time, microbes were not widely recognized as vectors of disease, and many doctors ridiculed the notion that a lack of personal cleanliness could be responsible for their patients’ deaths. Ostracized by his colleagues, Dr. Semmelweis was eventually committed to an asylum, where he was severely beaten by guards and died from infected wounds.

Florence Nightingale, the English nurse and statistician, also promoted hand-washing in the mid-1800s, but it was not until the 1980s that the Centers for Disease Control and Prevention issued the world’s first nationally endorsed hand hygiene guidelines.

Washing with soap and water is one of the key public health practices that can significantly slow the rate of a pandemic and limit the number of infections, preventing a disastrous overburdening of hospitals and clinics. But the technique works only if everyone washes their hands frequently and thoroughly: Work up a good lather, scrub your palms and the back of your hands, interlace your fingers, rub your fingertips against your palms, and twist a soapy fist around your thumbs.

Or as the Canadian health officer Bonnie Henry said recently, “Wash your hands like you’ve been chopping jalapeños and you need to change your contacts.” Even people who are relatively young and healthy should regularly wash their hands, especially during a pandemic, because they can spread the disease to those who are more vulnerable.

Soap is more than a personal protectant; when used properly, it becomes part of a communal safety net. At the molecular level, soap works by breaking things apart, but at the level of society, it helps hold everything together. Remember this the next time you have the impulse to bypass the sink: Other people’s lives are in your hands.

Fire up a hand-poured soy candle. Outdoor inspired scents are the next best thing to being there.

Hey life's short. Why not sample all the soaps? Our subscription bundle makes it easy.